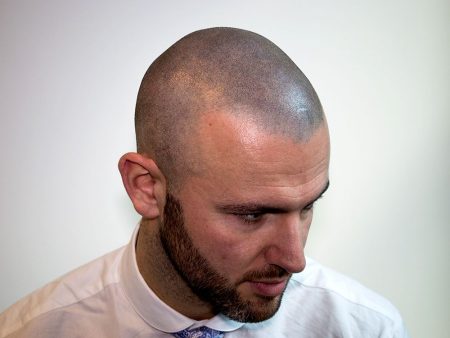 For the past several years, one of the most anticipated and discussed hair loss treatments has been Scalp Micropigmentation (SMP). Scalp Micropigmentation is a process where a physician or trained technician uses a tattooing process to mimic the appearance of shortly cropped hair on bald or thinning scalp. The process helps create the illusion of increased density in individuals with thinning hair or a “shaved,” “cropped” appearance in those with a completely bald scalp.

The first, and possibly most significant, advantage of temporary SMP is that it is not permanent. Unlike traditional SMP, temporary Scalp Micropigmentation only lasts 6 to 24 months (with the average being around 18 months), after which time it slowly fades away and must be applied again. This acts as a significant advantage to those who desire the procedure, but fear the permanent nature, or those who are dissatisfied with the results of the procedure, and would otherwise require laser removal to correct the unsatisfactory work.

Although the new temporary SMP process does offer some advantages over the traditional, permanent treatment, it does possess several disadvantages as well:

First, and foremost, SMP, in general, is a process that is only ideally suited for a very specific type of hair loss sufferer. In general, individuals with thinning hair looking for density increases akin to those seen with topical concealers, and individuals trying to create the illusion of a “shaved” or closely “cropped” appearance are the “best” SMP candidates. For other types of patients, SMP is not likely advantageous, and should be approached cautiously.

Another disadvantage of temporary SMP is the need to repeat the process every 6 to 24 months. Although many would view this as a positive attribute, it does guarantee additional cost, time, and travel, and may not be realistic for many hair restoration patients. Finally, although temporary SMP ink is designed to fade over time, it’s not completely clear whether or not the tone of the ink will change while fading (possible turning into a blue or green hue), or if the fading ink will result in an “awkward” appearance until completely gone.

Altogether, we suggest that hair loss sufferers objectively weigh both the “pros” and “cons” of temporary Scalp Micropigmentation, and then, if satisfied with the information, consider a thorough consultation with one of our recommended hair restoration clinics.

Written and Published By

Is One Hair Transplant Enough Over A Lifetime?

How Many Hair Transplant Grafts Can I Get in My Lifetime?

How Should I Research a Hair Transplant Surgeon?