I am scheduled to have a hair transplant, but I would like to know the recovery time for the procedure. How long should I request off work and how many days does the pain last? 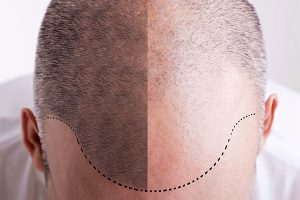 The majority of patients begin to shed their transplanted hair around the third to fourth week after hair transplantation. During this time patients enter what is commonly referred to as the “ugly duckling” stage. The “ugly duckling” stage occurs when patients shed their transplanted hair and develop a condition called telogen effluvium otherwise known as “shock loss”.  Shock loss is a short-term form of hair loss that occurs because of the trauma that the scalp endures during surgery.  Shock loss is described as a chronic hair shedding for a prolonged period of time lasting up to six months. The constant hair shedding causes patients to appear balder than they were before surgery. However, in most cases the shock loss is temporary and resolves on its own after a few months. In most cases, patients begin to grow their transplanted and “shocked” native hair at the same time in a synergistic manner.

The recovery time depends on the surgical technique used Follicular Unit Excision (formerly known as Follicular Unit Extraction FUE) or Follicular Unit Strip Surgery (FUSS). FUE is a minimally invasive procedure that requires a short period of down time and in most cases patients are able to return to their normal routines after two-weeks. However, as previously stated some patients may experience persistent redness or shock loss, which may temporarily change their appearance for a short period of time and this can occur with either surgical technique. FUSS is also a minimally invasive procedure, but does require a slightly longer recovery time. Most patients are able to return to their normal routine after a few weeks however, it is recommended to stay away from lifting heavy weights because the heavy lifting may cause the scar to stretch. Patients who are requesting time off of work should request a minimum of two weeks off to allow enough time for the grafts to heal, shed and the redness to subside before returning to work.

Written and published by,
Melvin- Editorial Assistant and Forum Co-Moderator for the Hair Transplant Network and The Coalition of Independent Hair Restoration Physicians