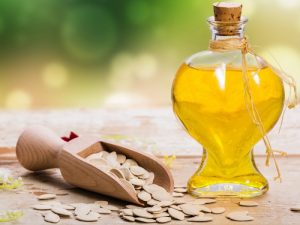 Does this mean that pumpkin seed oil is a new miraculous drug that will cure genetic baldness? No. However, it may have some benefit for treating male and female pattern hair loss. Let’s discuss the mechanisms that may make pumpkin seed oil a viable option to treat hair loss.

Pumpkin Seed oil is rich in micronutrients such as zinc and linoleic acid which have both been linked with treating hair loss. Additionally, studies show that pumpkin seed oil can be an effective 5-alpha-reductase inhibitor, which basically means it blocks the conversion of Testosterone to Dihydrotestosterone (DHT) the main catalyst for genetic hair loss. Furthermore, pumpkin seed oil contains anti-inflammatory properties which is thought to be the mechanism for inhibiting Dihydrotestosterone (DHT).

While the studies conducted in 2014 by Korean researchers sound promising, it is important to understand that the published study did not only contain pumpkin seed oil as an active ingredient. Therefore, it is impossible to deduce whether pumpkin seed oil was the sole purpose for the improvement in hair loss. Based on the studies available however it appears that pumpkin seed oil may be a safe alternative to FDA approved treatments such as Propecia (finasteride) but not likely to be as effective.

Getting an Aggressive or Conservative Hair Transplant Can Prince Harry save his hair?

How Many Grafts Do I Need To Get A Dense Hair Transplant?