Why Create an Irregular Hairline During Hair Transplant Surgery?

This question, from a member of our hair loss social community and discussion forums, was answered by Coalition hair transplant surgeons Dr. Ron Shapiro and Dr. Glenn Charles: 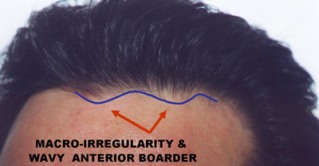 The goal of any hair transplant procedure is creating natural, realistic results. A very important aspect of achieving subtle, realistic results is recreating a natural hairline. Though many individuals assume that hairlines unaffected by hair loss are straight and regularly shaped, this is not the case. In fact, in order to create a realistic hairline, hair restoration surgeons must utilize an irregular, “zig zag” design.

In fact, according to Dr. Glenn Charles:

The term we often use to describe the hairline approach is creating a “regular irregularity.” Meaning there has to be a certain degree of randomness to give a natural appearance. However, there also has to be some method to the madness. You could also call this “Zig Zag” hairline design.

There are many individual characteristics of a normal hairline that work together to create a natural, undetectable look. Close observation of a natural hairline reveals that it initially appears soft and ill-defined but gradually take on more definition and substance as it moves posterior. The true fullness of a hairline begins slightly behind the most anterior boarder. In addition, the anterior border should be irregular and wavy. Creating too abrupt or straight of a hairline does not look natural and is a common mistake made by beginning transplant surgeons.

To create a natural hairline, the following must be taken into consideration: all hairlines have variable high, alternating with low, density spots along the anterior boarder of the hairline. This is called micro-irregularity. All hairlines have an undulating non-linear anterior boarder. This is called macro-irregularity. A straight line is abnormal and looks unnatural. All hairlines start soft and build density gradually over a few millimeters to a centimeter. A hairline that looks like a harsh wall is unnatural.

Clearly, this non-linear, irregular, “zig zag” pattern to the frontal hairline is necessary for creating natural results. Altogether, this is why physicians create an irregular hairline during hair transplant surgery.

Is Propecia (Finasteride) More Effective for Younger Hair Loss Sufferers? Why Should I use Finasteride (Propecia) and Minoxidil (Rogaine) if I’m Undergoing Hair Transplant Surgery?