Propecia vs. Avodart: Which Internal DHT Inhibitor Should You Choose? Part 2 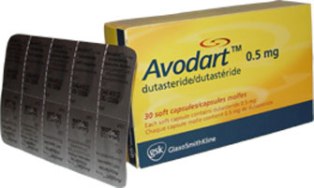 This is Part 2 in a two part series. Before reading on you will want to read Part 1.

Since Avodart is a dual 5AR inhibitor and is much stronger than Propecia, it is generally accepted that it is possible that it can be a more effective treatment for male pattern baldness. However, without sufficient testing this is speculative.

GSK produces Avodart in a dose of .5 mg capsules. This is the generally prescribed dosage for the treatment of BPH. An optimal dose for the treatment of MPB is also purely speculative at this point. We do know the dosages used in GSK’s FDA trials. Scientists conducting these trials studied the effects of Dutasteride at several different daily dosages. These dosages were: 0.01 mg, .05 mg, .5 mg, 2.5 mg and 5.0 mg per day. Not surprisingly, the highest dosages of 2.5 mg and 5.0 mg per day were found to achieve the highest amount of DHT suppression.

At .5 mg per day, Dutasteride still suppresses around 90% serum DHT and 55% scalp DHT. According to GSK, during both the first and second years of the two-year trial, .5 mg Dutasteride daily decreased around 92% of serum DHT concentration.

Since both inhibit 5AR, Dutasteride’s list of side effects are similar to Finasteride’s, but with the increased DHT inhibition comes the increased risk. Avodart’s listed side effects are impotence, decrease in libido, swelling or tenderness of the breast, a decrease in the amount of semen released during sex, and allergic reactions such as rash, itching, hives, and swelling of the lips or face. Like Finasteride, Avodart should also be avoided by women.

Many users of Finasteride and Dutasteride have reported a phenomenon known as an initial “shedding” period when first beginning treatment. This period has been reported to occur anywhere from one to six months from beginning treatment and accounts vary as to whether it returns cyclically or if it is just a one-time occurrence. It is believed that shedding occurs when the medication actually accelerates the cycle for hair follicles that are destined for the Telogen (resting) phase resulting in what appears to be an increase in hair loss.

In reality, this is regarded as a “good” sign in that it shows that the user is a responder to the medication. The shedding phase is normally temporary, lasting no more than a few weeks. When the hairs shed run through their normal resting cycle, it is generally noted that they return within a few months. There have been no conclusive studies to support this hypothesis and all evidence collected regarding shedding thus far has been anectodotal.

Possible importance of DHT in the body

Before using either dutasteride or finasteride, hair loss sufferers should also be aware that DHT actually plays an important role to play in the human body. All of DHT’s effects on the body have not yet been realized and the long-term effect (>10 years) of these medications have not been clearly established. Patients are strongly cautioned that it may not be to their benefit to eliminate all traces of DHT from the body. It is also important to note that both medications are to be continued for as long as the patient wishes to keep its benefits.

Since it is believed to be better tolerated, has less of a chance of bringing on unwanted side effects, and is FDA-approved, Propecia is generally regarded as the best medication to begin with. Many men find that Propecia alone or coupled with minoxidil works great for them.

Some men will choose to try Avodart after an initial trial with Propecia. It is important to know that users should give medicines time to work before switching up. Give Propecia at least 9 months to a year before making conclusions as to its efficacy. Taking a “before/after” series of photos can be very helpful at establishing its potency. Also remember that these medications are primarily for maintaining the hair that you currently have; any regrowth is to be considered an added benefit. Realistic expectations and an optimistic, yet objective approach are important to deciding the efficacy of a medicinal hair loss regimen.

Both medications are can be effective at inhibiting the 5-alpha reductase that binds with testosterone to produce DHT. Avodart is a highly potent medication that inhibits both type I and II of the 5AR and Propecia, while also potent, only inhibits type II. When beginning any new medicinal regimen, it is best to research all areas carefully including dosage recommendations, side effects, and to adhere to the recommendations of a physician.

Next: Concealers – Hiding your hair loss

Propecia vs. Avodart: Which Internal DHT Inhibitor Should You Choose? Part 1 Concealers – Hiding Your Hair Loss