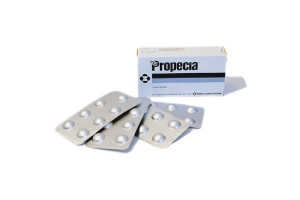 There has been an abundance of questions on the Hair Restoration Research Forums about Propecia lately, so I decided to dig up the facts.

“PROPECIA works on a key cause of hair loss by significantly reducing the amount of DHT. Specifically, PROPECIA inhibits the formation of DHT in your scalp. Lowering DHT appears to inhibit the further shrinking of affected hair follicles. PROPECIA helps regrow visible hair and reduces further hair loss.

It is, in fact, the first and only FDA-approved pill proven to treat male pattern hair loss on the vertex (top of head) and anterior mid-scalp area (middle front of head) in men.”

“Vertex (top of the head) Study

PROPECIA was demonstrated to be effective in the longest controlled study of male pattern hair loss ever conducted. In this 5-year study of men with mild to moderate hair loss:

* 9 out of 10 men on PROPECIA had visible results (either regrowth of hair, 48% [134 out of 279], or no further hair loss, 42% [117 out of 279]) vs 25% (4 out of 16) on placebo (sugar pill), according to an assessment of photographs by an independent panel of dermatologists. View results.
* 2 out of 3 men on PROPECIA regrew hair, as measured by hair count. All the men in the study who were not taking PROPECIA lost hair.
* A majority of men on PROPECIA were rated as improved by doctors: 77% (210 out of 271) vs 15% (2 out of 13) with placebo.
* A majority of men on PROPECIA reported their bald spot getting smaller, their hair loss slowing down, and the appearance of their hair improving.

PROPECIA is for MEN ONLY.

Further treatment is unlikely to help if the drug has not worked within 12 months. If you stop taking PROPECIA, you will likely lose the hair you have gained within 12 months of stopping treatment.
Anterior Mid-Scalp (middle front of the head) Study

PROPECIA was also shown to be effective in a study of men with hair loss on the middle front of the head.”

It is also important to be aware of potential safety concerns when taking of Propecia.
From the Merck website, Propecia.com:

“PROPECIA was developed to treat mild to moderate male pattern hair loss on the vertex (top of head) and anterior mid-scalp area (middle front of head) in MEN ONLY. There is not sufficient evidence that PROPECIA works for receding hairlines at the temples.

PROPECIA is for the treatment of male pattern hair loss in MEN ONLY and should NOT be used by women or children.

You should not use PROPECIA if you are allergic to finasteride or any of the ingredients of PROPECIA.

Contact with the semen from a man being treated with PROPECIA is not a risk to the unborn child of a pregnant woman.
Clinical studies showed that side effects were uncommon and did not affect most men

A small number of men had sexual side effects, with each occurring in less than 2% of men. These include less desire for sex, difficulty in achieving an erection, and a decrease in the amount of semen. These side effects went away in men who stopped taking PROPECIA because of them. In addition, these side effects decreased to 0.3% of men or less by the fifth year of treatment.

PROPECIA can affect a blood test called PSA (prostate-specific antigen) for the screening of prostate cancer. If you have a PSA test done, tell your doctor that you are taking PROPECIA.

In general use, the following side effects have been reported: allergic reactions including rash, itching, hives, and swelling of the lips and face; problems with ejaculation; breast tenderness and enlargement; and testicular pain. You should promptly report to your doctor any changes in your breasts such as lumps, pain, or nipple discharge. Tell your doctor about these or any other side effects.”

For more detailed information, see below: