Planning a Hair Transplant for Patients with Advanced Hair Loss

This question, from a member of our hair loss social community anddiscussion forums, was answered by Coalition hair transplant surgeon Dr. Michael Beehner:

If you wait until you’re older for a hair transplant and the sides drop, there’s limited donor so not much can be done. But for young people, they say to wait because the sides may drop as they get older. So, with my very limited knowledge, wouldn’t it be better to have the hair transplant and get as much coverage from the maximized donor? Then if the sides do drop, the lesser supply won’t be so bad, as the demand will be less.

If you grow your hair out a bit, wouldn’t that cover dropped sides anyway? People often look better with shaven sides and hair on top so would it make too much difference? I’m becoming very curious about the sides dropping lately. Now that my hairline is sorted, I find myself noticing how high other people’s crowns/sides are, rather than any recession or loss at the front (which used to be what my eye was drawn to immediately).

I see a very bald on top fella and instead of thinking of the bad hairline, if the sides are good, I think that they could be transformed with a good megasession.

As I have said many times in the past, for Norwood VII patients with their side fringes down the side of the head, I use what I term a “forelock pattern” approach. This basically has two principal features: One, the main area of relative hair density is created in the front-central aspect of the man’s scalp. And second, the vertex/crown area way in back is pretty much left alone. In other words, you try to make a difference in the most important area of the head which frames the face, and, due to the very limited donor resources and the vast area that needs filling in, you prioritize and hopefully the patient in the consultation sees the wisdom of that approach and you end up with a very happy patient who otherwise would face being very, very bald the rest of his life.

It is also possible to look for warning signs in young men in their 20’s who you can predict have a strong chance of going on to a Norwood VII hair loss pattern later in life. In such young men, I use a forelock template when getting them started with hair transplantation.

I have attached two examples of mature aged men with Norwood VII balding patterns. The first gentleman, whom is viewed from the right oblique angle, had only one session of 1500 grafts, and was actually having his final, second session the day the “after” photo was taken. 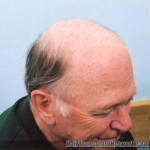 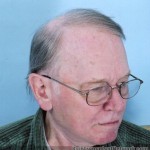 The second fellow, who is viewed from the left side, had two sessions of around 1600 FU’s each time. His drawn pattern is shown also, which shows the pear-shaped area in the front-central region which was transplanted with more density and using more 2-hair and 3-hair follicular units in this region. The drawn pattern from the side view shows the use of “filling in the humps” on the side, so that there is a meeting of low density FU’s near the crease on top, thus creating a “mirror image” effect. 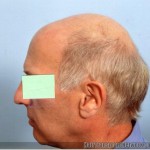 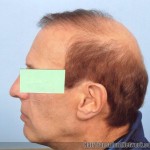 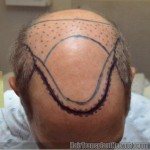 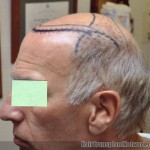