This is Part 3 in a three-part series. Before reading on you will want to read Part 1 and Part 2.

There are conflicting reports on how minoxidil actually works.

It was originally thought to work as an artery vasodilator. When DHT attacks the hair follicle artery, the artery becomes weakened and shrinks, therefore limiting the amount of blood flow available to the hair and essentially starving it to death.

Minoxidil, an artery vasodilator, improves the blood flow channel in the artery, though it is important to note that the artery itself is still damaged. Minoxidil essentially dilates the artery allowing an increased blood flow to travel to the hair follicle. This dilation period is temporary, thus the need for the twice-a-day treatment.

However, a recent study performed by cosmetics manufacturer L’Oreal shows that it may work by activating PGHS 1 (prostaglandin endoperoxide synthase-1), which promotes hair growth. This makes sense, considering that there are other vasodilators available besides minoxidil, yet they do nothing to promote hair growth. 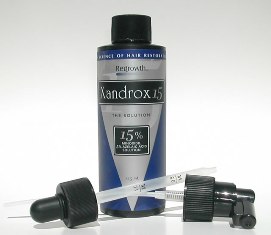 Dr. Lee at Minoxidil.com has a great deal of information concerning minoxidil, its uses, and benefits. The site sells concentrations of minoxidil not sold in stores – up to 15%. He is also launching a 12.5% solution later this month that does not have the traditional “greasy” feeling.

Other Concentrations and Delivery Methods

There have been studies to research the benefits of orally ingested minoxidil. This delivery method has shown that hair regrowth can come on a bit faster and stronger, but the side effects are severe, to say the least. Additionally, cosmetically acceptable hair growth was only shown in 18% of the tested subjects. They include headaches, fluids retention, lethargy, depression, heart palpitations and tachycardia (rapid heart beat). It is because of these severe side-effects that minoxidil is not acceptable for use orally.

When combined with Retin-A, some believe that minoxidil has shown further positive results. Retin-A is found in many cosmetic and dermatology applications and is touted as an antiaging skin formula. The effects of Retin-A and minoxidil combined can be quite promising in some users.

Minoxidil can be a great addition to the hair-regrowth regimen of any hair loss sufferer that is truly serious about regrowing lost hair and staving off future loss. It has been proven to not only bring old hair follicles back to life, but also to keep them in the anagen (growing) phase longer. It’s important to remember that minoxidil is not a cure for androgenetic alopecia, just a treatment. It may not be the answer to the hair loss sufferer’s prayers, but coupled with other treatments can be a power weapon in your arsenal.

Next: Nanogen vs. Toppik; Which micro-fiber concealer is best?