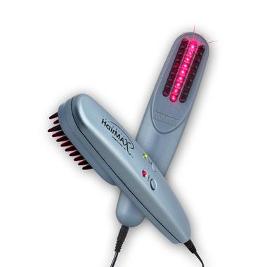 I know that there is a lot of skepticism towards laser hair treatment on our hair loss forum  and my view – although I’m not endorsing or supporting the use of any low level laser therapy (LLLT) product – is equally unpopular simply because I believe, from a scientific standpoint, there is not enough evidence to validate nor dismiss claims of effectiveness and so I refuse to outright condemn laser therapy as a treatment until further investigation is done.
History of Laser Therapy for Hair Loss:
In 1967, shortly after the first working laser was invented, a researcher named Endre Mester with the Semmelweis University of Budapest developed a theory that exposure to cold laser light would, eventually, lead to cancer – he theorized that melanoma (a malignant form of skin cancer) was likely to form from exposure to these cold laser light bands, similarly to exposure to UV radiation emitted by the sun. To test his theory, he shaved a group of mice and trapped some of them in a cage with constant cold laser light exposure and left the other half as a control group. To his surprise, the light didn’t cause cancer in any of his animal subjects; however, the mice that were exposed to the laser light grew back their shaved fur much faster than the control group. Mester named his discovery laser or photo (light) biostimulation as he theorized that, somehow, the laser light had stimulated the hair cells into an excited state of hair growth.
Simply knowing this, however, is not enough for us to assume that laser hair treatment would be a satisfactory treatment for male pattern baldness (MPB). The first problem is that animal studies are notoriously unreliable. Secondly, mice do not suffer from MPB. Finally, just about anything can make a mouse grow hair.
Problems with Validating Laser Therapy as a Hair Loss Treatment
For the validation side of the argument, there are plenty of problems:

Problems with Dismissing Laser Therapy as a Hair Loss Treatment

On the dismissal side, there are also some issues:

The point is that there is not really enough evidence one way or another to determine whether LLLT is an effective treatment for baldness and most respected proponents only recommend its use in conjunction with other treatments.

The debate does put me in mind of a device that once came through our lab for independent validation study. Before I tell you what the device was, perhaps I should tell you that many researchers and assistants did crack some jokes as the device was a “penis stretcher” or penis traction device. Long story short, the results of our studies did indeed prove that the device did work as its manufacturer claimed (men gained between one and three inches in length over a year period). Its claim was actually scientifically sound as most of the body’s tissues are remarkably elastic and do respond to traction. Some of the sites marketing the devices are, however, misleading.

The devices work by causing microscopic rips in the tissue at the cellular level. This prompts the cells to divide and heal the breach with more tissue. This will, with time, engorge and enlarge the tissues to which traction is applied. Although most of these sites claim that the procedure is similar to neck stretching that is done by some remote tribes, it is actually closer to ear stretching that has been popular recently in urban cultures.

Still, despite our study and numerous others contracted to validate the penis traction device makers’ claims and their successful outcomes, many opponents claimed and still state that there is no way the devices could work. Much like the naysayers above, none of these people could provide any reasoning as to why they believed the devices would not work. Also, like the laser therapy devices, many among the opponents were and are medical professionals who also have no evidence or logic to support their opinions. In my book, an uninformed and unaware opinion fails by its very nature to be a professional opinion.

Concerned about a Chest Growth by Taking Propecia Visit to Dr. Kabaker in Oakland, California

Can I Have A Hair Transplant With DUPA?