A lot of discussion on the forum relates to donor site scarring. I think there are 3 primary factors in determining scar outcomes, and I’ll attach a few examples of really good and not so good scars of mine,  to illustrate this.

First, skin tension of the closure. This directly impacts scar results on all parts of the body. The tighter that the skin, not necessarily deep tissues, is closed, the more likely the scar will either widen, or hypertrophy(mound up) or both. This can be lessened by keeping a donor strip longer and narrower as opposed to shorter and fatter, and by closing the deep tissues in such a way as to take the load off of the skin edges and put them on the deep tissues. This keeps the skin edges opposed and prevents or at least limits widening. This does limit total hair harvested at my practice however as we keep strips about 1.75 cm in width. Sometimes we take that out and find that we likely could have taken a wider strip as the scalp closes so easily, and other times even that is a struggle to close. The trouble is you just don’t know until you are doing the case.

Second is the skill of the hair restoration surgeon. There clearly is a learning curve to everything and I’ve seen plenty of great doctors who simply weren’t consistent at suturing the wound. That is not to say that a really good surgeon doesn’t get bad scars; rather they probably don’t get a lot of bad scars when compared to the amount of average or above average scars in their patients. But gentle handling of the skin, care in manipulating and managing wound tension, and attention to detail often result in pretty decent scars in the hands of consistent doctors. Nevertheless, I do occasionally get a scar that I’m really surprised at and that is in spite of having now done more than 5000 surgical procedures on faces—and mostly in women. Fortunately though that isn’t common but it does require discussion prior to surgery.

Third is patient physiology. This is a huge component and impacts all types of incisions and scar results. The best predictor of bad or good scarring is already existing scars on the patient, and in the absence of that, the family history of scarring outcomes. If every cut the person gets results in a terrible scar, more than likely even the best closed wound will not be as good in that patient as in a patient who really doesn’t scar significantly from any type of trauma. Plus there is definitely a racial component. In the late 90s I wrote a publication on the management of keloids and hypertrophic scars and documented that scar problems are 10 times more common in black [/tag]hair loss sufferers[/tag] as white patients , and 7 times more common in Asians as whites. It’s reasonable to still include those people as patients, it just requires a little more planning, more followup to look for early scar problems, and more preoperative discussion about scar risks. Plus, I ask everyone to return for a scar check at 4 weeks out from surgery. More often than not, if you are going to get a bad scar, there will be some sign of it at that time. Dealing early with a little scar problem is way better than dealing with a bigger problem later. But surprisingly I’d guestimate that only about 30% of hair patients show up, or email pictures, for scar evaluation at a month. By contrast 95% of face patients do show up and are often worried about perfectly normal scars at 1 month and a little reassurance calms the waters nicely.

So here are a few examples of my scars: three are absolutely perfect scars, two are average scars, and two are poor scars. All were done in a 2 or 3 layered trichophytic technique by me. I don’t know if they showed up for the 1 month free scar check, these are all at approximately a year out. The final example is a young man who had a skull procedure as a child and had a long, wide scar that we placed hair in at his first procedure. With his first hair case by me he was super easy to close with no tension. His scar was poor—even bad. Probably the worst that I’ve seen that I personally have done. And it wasn’t for lack of trying to get a good scar. Fortunately the hair that we placed into his pre-existing scalp scar from his skull surgery really did a great job in growing and camouflaging that, but he wanted a second strip case to add a little more hair and lower his hairline a bit. So we excised his old scar—as shown—and I did a 3 layer closure with absolutely no tension whatsoever on the skin edges. Even with that, at 8 months or so, his scar is not great, but at least its better than his initial strip results. Now he is an example of where physiology dictates outcome. He had 2 very easy and tension free closures, followed instructions, and still had poor scar results. Fortunately we’d already discussed this given his pre-existing poor scar from skull surgery, but still, both he and I hoped for the usual nice scar. 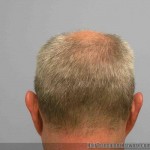 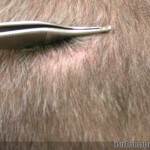 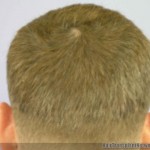 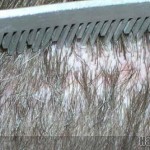 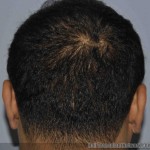 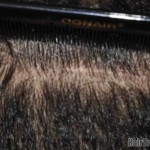 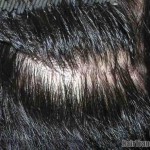 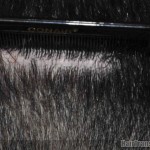 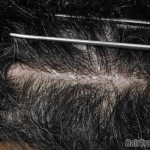 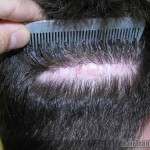 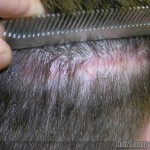