Male pattern baldness can be a confusing affliction to have. By the time a guy first notices that he has it, he has lost at least 50% of the hair in that region of his scalp. That means that by the time he is able to start looking for a viable hair loss treatment, he is has already lost half of what was once his.

Add to that the confusion a plethora of hair loss scams, lies, and snake oils and you have a recipe for disaster for the average guy who has a receding hair line or a thinning crown. Even more alarmingly, it seems as if most family physicians and even dermatologists don’t know that Propecia and Rogaine, though FDA-approved, are not the only viable solutions available for male-pattern baldness. There are other hair loss treatments available. However, the trickiest part of all for the hair loss sufferer may be separating the truly beneficial treatments from the scams. Manufacturers can be convincing and will even feature fake physician recommendations and even phony scientific studies to back up their claims.

So when the average hair loss sufferer hears about copper peptides, his first reaction may be to ignore it as a potential snake oil. And who can really blame him? There have been a whole host of more plausible-sounding treatments to come along that turned out to be absolutely useless. The very idea that copper may contain any beneficial properties for hair loss just seems too far-fetched.

But the science behind it is strong. Dr. Loren Pickart has been studying copper peptides for over two decades and has released a line of products that contain the mineral for hair loss and other purposes, including anti-wrinkle and acne formulas. His research has consistently pointed out that copper peptides, when applied using appropriate chemical vehicles and when in the appropriate concentration, can thicken vellus hair into thick terminal hairs, increase hair follicle size, and regenerate scalp skin, creating a healthier environment of scalp hair growth.

Dr. Pickart helped pioneer the use of copper peptides in skin-healing treatments as far back as the 1980s and was once a member of the research team that constructed hair loss-related products that preceded the well-known Graftcyte and Tricomin.

Graftcyte is a spray that is commonly given to hair restoration surgery patients by their physicians for use during the crucial first weeks post-op. The copper peptide formula has been proven time and again to assist in healing the recipient area. It serves to allow the transplanted hairs to heal and shed the small scabs that form in the days following the procedure. The spray also alleviates any redness and controls associated itching that can occur immediately after the surgery, rendering a much more pleasant post-op healing phase which typically enables the patient to return to daily life much faster. Graftcyte is manufactured and distributed by ProCyte. Dr. Pickart’s own copper peptide formula Folligen can be diluted with 50% water and used similarly to Graftcyte. 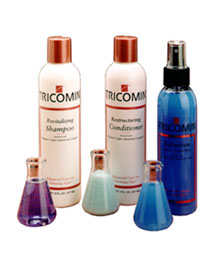 Tricomin was also released by ProCyte. While the product’s release was highly anticipated by hair loss sufferers, many of those hopes were dashed when it was realized that the concentrations of copper peptides available in Tricomin were much less than those used in associated studies which touted copper’s efficacy on regrowing lost hair.

Along with the scientific studies, anecdotal evidence seems to support copper peptides’ ability to improve scalp conditions for hair regrowth. Long-term users frequently swear by their success with the products, citing healthier, thicker hair where the product is applied. And since copper peptides’ benefits aren’t limited to just fighting hair loss, the same users that benefit from that facet also frequently use products such as creams and lotions on their faces for firmer, more youthful skin.

In the slew of products available for the treatment of male-pattern baldness, knowing which products are backed by good science and which are snake oil can be a daunting task. And in the process of sifting through the seemingly endless scam products, some treatments that actually show promise and are backed by scientific studies are easily brushed to the side. Often, products that contain copper peptides have been unfairly chastised and ignored; however with a little research it’s much easier to see which products contain viable amounts of the active copper peptides and which are more likely to contain filler ingredients to fool its users.

While copper peptides alone will most likely not be enough to stave off future hair loss or regrow lost hair, the addition of a copper peptide treatment to one’s hair loss regimen that includes a DHT-inhibitor like Propecia and a growth stimulator such as minoxidil can likely be extremely beneficial.

What shampoo will help me regrow my hair? October 2006 ISHRS Physicians Meeting in San Diego

Can I Use Rogaine Once Per Day?